Yes, you heard that right. On January 18, 2019  Microsoft had made an official announcement that they will be stopping Windows 10 mobile phone support on December 10, 2019. I know its bad news for many Windows 10 smartphone users including myself. But the end is here. No more Windows 10 mobile updates.

The demand for the Windows Phone has decreased dramatically over a couple of years. People prefer Android and IOS based devices more, and as a result, Windows mobile has come to an end. 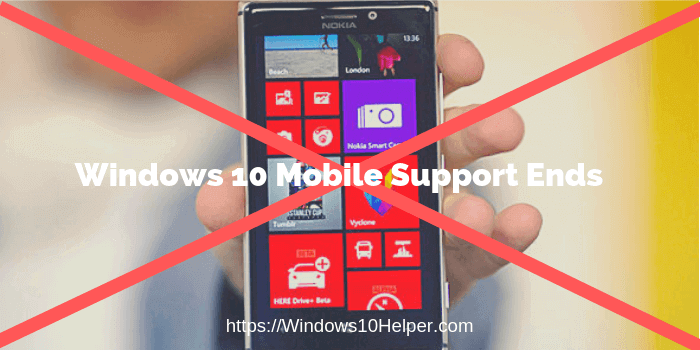 It’s been more than a year when Microsoft announced the end of support for Windows Phone 8.1 and now the end of Windows 10 mobile follows.

This news came to me with no surprise as there were no significant updates for my Windows 10 phone from a long time. I was only one in my friend circle who was using the Windows smartphone and was satisfied with it. Ya Google Services like Google Maps unavailability on Windows phones had to lead me to buy an Android phone as well.

What Will Happen When Windows 10 Mobile Support Ends?

Microsoft already advised Windows Mobile users to switch to Android or IOS. But if still, you want to keep your Windows phone than you need to know a few serious issues that you may face over time.

Should You Throw Away Your Windows 10 Smartphone?

Definately not, you don’t have to do that. My suggestion is to get an Android or IOS based phone and transfer all your data to the new phone before the support ends. You can still keep your Windows mobile phone for calling purposes or clicking images or maybe more.

I want to clarify that there is no hurry to get a new phone there is still time, and I think when the Support ends you can even use your Windows-based phone for an additional six months or so. That entirely depends on you.

If you are a big fan of some of the Microsoft apps for mobile, you can still get those apps on the Android device. Microsoft has already developed many of their mobile apps on Android platform.

Microsoft has developed a launcher for Android that integrates Windows 10 and Cortana for multitasking.

Change is always good, and we should move with the flow. I think if Google supported Windows mobile from the beginning by given their services to Windows phone users, this story would never have ended like this.

Rizwan is the Founder of WindowsQnA who is always ready to solve queries related to Windows OS. Apart from blogging and helping Windows OS users he loves to travel and enjoy earing Asian food.
View Profile View All Posts

My Windows 10 mobile runs as smooth as it is new. I don’t have any issues with the phone and don’t want to switch to any other phone as for now. I understand that Microsoft Windows 10 phone was not a very big hit but i found it more convenient than then the androids. I hope Microsoft will rethink its decision to stop the Windows 10 support.

Change is not always good. What a stupid comment. In fact, change is usually bad. Good change is the rare, notable exception. People thinking all change is good is the source of a lot of the world’s current woes.
That said, there is no question in my mind that Windows 10 Phone/Mobile continues to be superior to Android. But people are stupid, and companies are bound by the vagaries of the marketplace and stupid people. Thus, another BAD change gets added to that side of the ledger.
When will Android learn to actually use SD card memory? That is another example of a stream of bad changes as Android has become worse and worse at being able to utilize SD card memory. Maybe Microsoft will donate the Windows code that uses it so well to so that Android can have some good change. But I won’t be holding my breath, because most change is bad.

Windows 10 Mobile was a far superior OS to Android. By dropping phones, MS may have ended their legacy. There only chance of recovery is to add telephony capability to tablets running full windows 10. I used to dislike MS when they were the top dog and other OS’s were superior. Now, I appreciate how MS has maintained compatibly with very old software and Win 10 is the superior OS. But they cannot afford too many more mistakes such as dumping windows 10 mobile prematurely.

I am sick about going to an android device which is my plan. No apple devices as they are stupidly expensive and such a proprietary scam. I have had a windows phone for over 6 years and had zero problem. Easy to use, fast and just plain simple. I don’t get it.

I am an avid fan of windows phone. I hope Microsoft will attend this issue and change their mind to end their support to windows phone. It’s still the best operating system on smartphone I’ve ever known. So smooth and very responsive even in my windows 8.1 device.

In my opinion, Microsoft rose to power (decades ago) because of the individual hobbyist and tinkering enthusiast. The same thing happened with Android and the XDA developers. If they were smart, they would have provided an open platform for experimentation on the Windows phone. If the leadership in Microsoft would have a little respect toward the user ( like they do with the .NET developers ), I think there is opportunity still with a revised Windows Phone, if they opened their eyes.

A heck of a shame by my opinion.
I have always enjoyed most of my windows phones. My current and apparently my last Windows-10 phone is an Alcatel Idol 4S, which is not only the fastest and easiest Windows phone I have ever owned, but enables me to actually VM remotely and securely into my Development PC at work, in a pinch, from almost anywhere to troubleshoot or fix software!
Why would I do this you ask? Because in a pinch, I only need to have my phone to work, no tablet or laptop necessary. If I don’t mind an extra cell phone case on my belt, I can also have my folding keyboard, compact mouse, Continuum docking port, HDMI cable & USB-C wall-plug along for the ride. Which of course means that I can now troubleshoot, architect and develop desktop, mobile, or Azure apps from anywhere.
Now I will admit that my Windows phone haven’t always been the fastest and unfortunately with the smaller market, some apps were never developed for the Windows phone (i.e. my wife and I have the same bank. On her Android, she can make a picture of a check and deposit it. However the bank software exists only for Android and Apple. I didn’t mind it enough to switch however).
Now, my user experience is the same across all devices I use, which means I don’t spend nearly as much time lamenting my phone or phone OS as my wife does. She is trying to constantly figure out why her phone does weird things like losing pictures, dropping calls, intermittently changing her settings like blocking her family and favorite contacts (I saw it change all by itself on at least 2-different Android phones), or simply slowing down or locking up at the worse times.
In all the years I had a Windows phone, I believe I’ve had only 2-blue screens of death and never had to constantly worry about MalWare on my phone like my wife does.
I’m surely going to miss my easy to use, and very reliable Windows phone.

I just bought my first Android phone (running Android Oreo) and after three weeks, still am not comfortable with my phone security, my privacy settings, or that I have notifications set up the way I want them to work.
Plus now I will need to lug around and break out my work laptop to troubleshoot or solve issues when I get that call from work.

I know it is business, so I am not really angry. However I am VERY, VERY disappointed.